Evelyn played in the 2019 Frost Toss this past weekend.  She hasn’t played much lately but she was feeling confident going into this tournament.

She played very well on day one on the 27 hole course.  She shot well over her rating and finished seven shots ahead of her competitor in second place.  She had a few out-of-bounds (OB) throws but was feeling good about playing the course on day two, knowing where all OBs were and discussing how she might avoid the same mistakes.

The weather on day two was not pleasant.   It was extremely windy and cooler than the day before.  The course played tougher for most.  Evelyn started out well.  Despite a few ‘bad’ holes, she maintained her lead and was in high spirits.  On hole ten however, things changed for the worst. The 204 metre, par four hole had an OB line to both left and right of the fairway plus a mando and additional OB area.  Her first tee shot was great but her second shot was carried by the strong winds and landed OB.  So too did her third and her fourth and her fifth as she tried to shoot over an OB area rather than playing safe and going around.  In total, she shot six OB shots on this one hole scoring her worst ever single hole total of 18.  Any disc golfer will tell you how frustrating it is when you make silly mistakes and how hard it is to get back on track for the next hole.  Most of us would want to just give up.  Evelyn did want to give up.  She struggled through the next few holes, unable to shake the disappointment from hole ten. 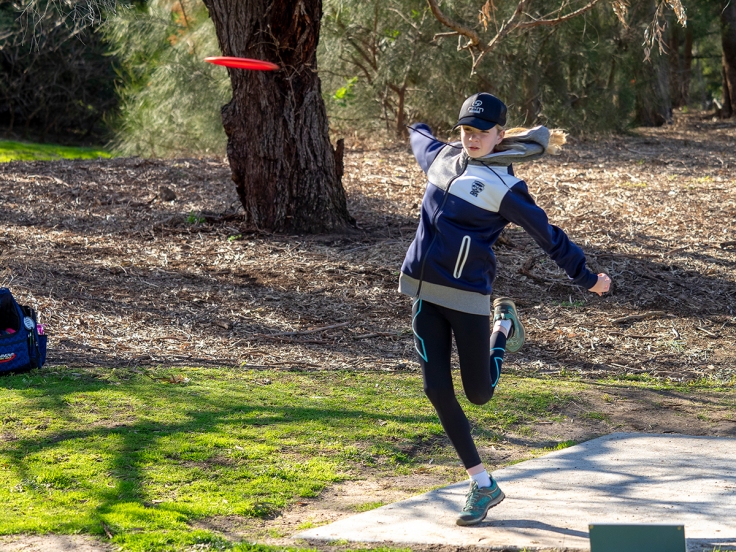 I had been photographing the tournament on another part of the course but was able to catch up with Evelyn, her Dad and the rest of her playing group a few holes later.  By then she had fallen to four shots behind the lead.  She was very upset and feeling discouraged.  She didn’t want to continue.  As a Mum, it was hard to see her so upset and struggling.  I wanted her to finish this tournament with her head held high and encouraged her to keep trying her best.  The camera was packed away and I took on the role of caddy.

She did continue but it was clear she wasn’t enjoying herself.  She certainly wasn’t throwing with the same confidence.    On hole 15 disaster struck again.  The gusty wind was playing havoc with discs and she lost her two main drivers in the lake; another two OB shots on a single hole.  It was heartbreaking.  She finished out the next few holes without her favourite drivers but was clearly struggling.  At her lowest point, she had fallen to 5 behind the leader, Michelle.

Upon passing tournament headquarters I noticed that the Open Women’s card had finished their round.  After 27 holes in adverse conditions, I am sure they were tired and ready to take a well-earned rest but they learned that Evelyn was struggling and without a second thought, rushed to join her as caddy and cheer squad for her final four holes.  They carried her bag, helped with her disc selection and advised her of the best lines.  Gradually her smile returned, and she started throwing with confidence again.  I stood back and watched her play the rest of the round with her two new caddies in tow.

Evelyn managed to climb back and finished just two shots behind the lead.  She may not have won her division but she did finish with her head held high and  learned an important lesson in resilience.  One bad hole does not define you.  The greatest reward for the day however was the show of ‘sisterhood’.  To have Australia’s two highest rated women’s disc golfers show such support and encouragement at a time when my daughter needed it most melted my heart.  Thank you Cassie Sweetten and Toosje Frequin.  You are both heroes in our eyes and make me proud to be a member of this amazing disc golf family.